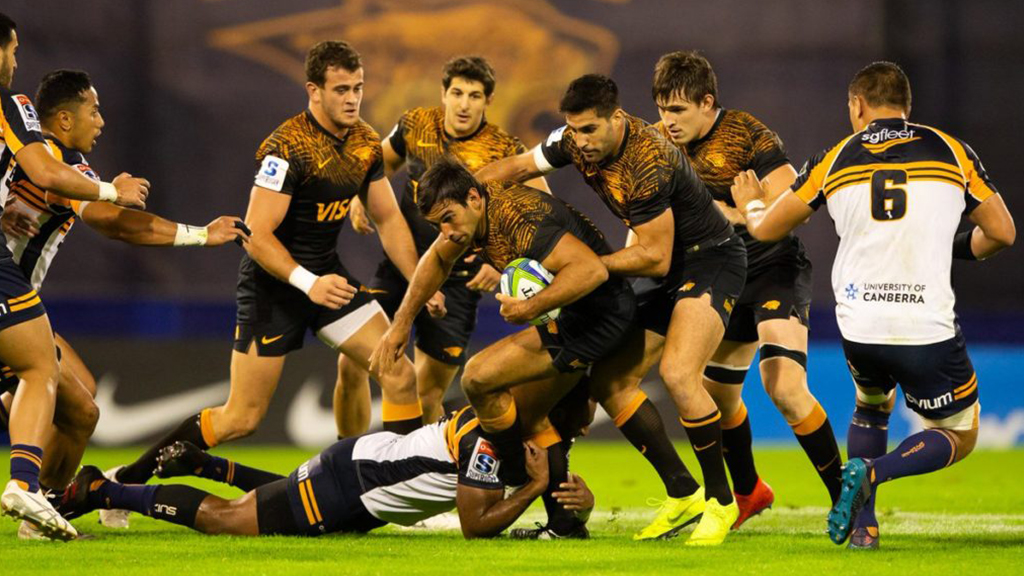 The Super Rugby Finals are once again upon us and no surprise to many, the Crusaders are there once more. The July 7th final scheduled to be held in Christchurch however, will probably have one of the most astonishing accomplishments to ever grace the field in the form of the Jaguares who have reached their first final after only four years in the competition.

The Crusaders statistics puts them as odds-on favourites with ten wins, three draws and two losses this year compared to the Jaguares 10-0-5 statistic at the end of the pool games. The Crusaders went on to win their quarterfinal game against compatriot Highlanders 38-14, matching them up against the Hurricanes who beat the Bulls 35-28. The Jaguares held off the Chiefs 21-16 in their QF to meet Australian hopefuls the Brumbies who beat the Sharks 38-13 in their match.

The first semifinal between Jaguares and the Brumbies was played in front of a roaring crowd at Estadio Jose Amalfitani in Buenos Aires with the home team scoring their first try in the fourth minute through Tomas Cubelli. His namesake Tomas Lavanini crossed the line once more for the Jaguares in the 19th minute after Bonilla kicked two penalties for the home team in the eighth and 14th minutes. Brumbies hooker Folau Faingaa reduced the deficit in the last play of the half and Christian Lealiifano’s conversion closed the half 20-7 for Jaguares lead over their guests.

Eight minutes into the second half, a lost Brumbies ball led to Jaguares winger Matias Moroni sprinting down the sideline before passing inside to Matias Orlando who could do nothing but score. Moroni scored another in the 63rd minute before fullback Emiliano Boffeli closed the try scoring fest with one of his own in the 78th minute. Final score 39-7 which will take the Jaguares to a historic Super Rugby debut this weekend.

The other semifinal, considered by many to be the “real final” was played at Rugby League Park in Christchurch (note that effective June 2019, the park has officially been renamed once more to “Orangetheory Stadium”).

In what was dubbed the duel of the fly-halves, in reference to the fan rivalry between Beauden Barrett and Richie Mounga supporters, the Crusaders came out strong from the first whistle. Mounga kicked the first penalty of the game in the third minute before fullback George Bridge ripped the ball from Salesi Rayasi’s clutches, passing to Ryan Crotty who kicked a magnificent cross-field boot towards Sevu Reece who kept the ball in play, juggled and secured it and crossed the line for his first try in the 13th minute.

A quick sidestepping Ngani Laumape powered through several defenders to score the Hurricanes first try in the 40th minute and the conversion by Beauden Barrett closed the half at 13-7 for the Red-and-Blacks.

The Hurricanes bounced back quickly with a Ben Lam try in the first minute of the second half but Mounga paid the favour back two minutes later. An incredible event then took place in the 5-th minute when quick thinking Laumape controlled a loose ball with his chest (!) to score his second for the night.

Reece scored his second of the evening in the 58th minute extending the Crusaders’ lead to 27-19 before TJ Perenara sold the dummy from a breakdown and scored one of his own in the 60th minute. Barrett’s conversion cut the lead back to one point with 18 minutes to go but Mounga’s penalty in the 73rd minute was enough to hold off the Hurricanes and take the Crusaders to their third Super Rugby Final in as many years with a 30-26 victory. The Jaguares will be coming to Christchurch with nothing to lose on Saturday and will be fielding a team packed to the brim with Puma players, but pundits and fans alike see little trouble for the Crusaders. One thing is for sure, the Jaguares will put up a worthy fight as will the home team who are looking to do the “three-peat” in front of their home crowd.