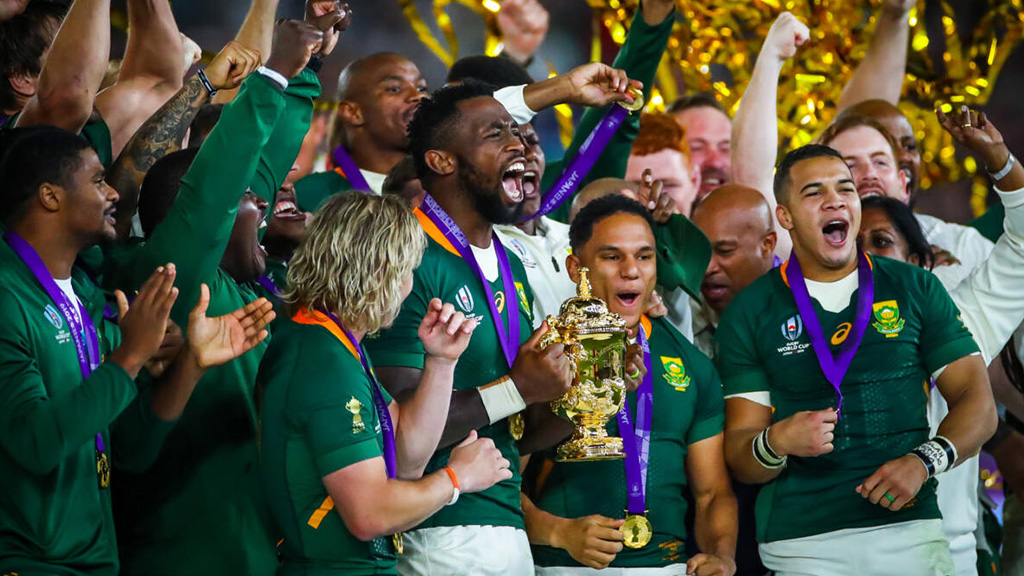 At the end of a grueling 80 minutes of Rugby, the end of by far the biggest match of Rugby this year and undoubtedly his biggest game ever Siya Kolisi, South Africa’s first ever black captain said the beautiful words that resonated beyond his intended listeners. He was grateful for his compatriots’ support, he was conscious of his country’s problems, and then he delivered a universal message of hope.

“We love you, South Africa, and we can achieve anything if we work together as one.”

The statement reinforced his leadership qualities and at the same time was a sincere reflection of the Rugby values that come with the game.

The first Rugby World Cup in Asia had come to an end. Hosts Japan had made the quarterfinals, defeating Ireland and Scotland in the process. England who had been knocked out at the pool stages four years ago defeated the champion All Blacks convincingly and had made it to the finals. The biggest typhoon to hit Japan in 60 years cancelled games for the first time ever at the tournament and South Africa who lost their first pool game against New Zealand did the unprecedented. They persisted, fought through and against all odds beat England in the Final to take their third Rugby World Cup, tying with New Zealand who were hoping to do a “three-peat”.

The energy that could be felt at every game, every fanzone area, every social media post was like no other beforehand. The Japanese people supported every team in the tournament by learning and singing along at the national anthems of every team before every game. They attended training runs in numbers of up to 15,000! And their own Brave Blossoms did them proud by showing the world that they were a force to be reckoned with, reaching their very first quarterfinals in this, their ninth participation in the RWC.

Almost every single match had backstories that tugged at your heartstrings. From Mamuka Gorgodze playing his final game for Georgia, Sonny Bill Williams and Ofa Tuungafasi sharing a moment of prayer together after every game, Kenki Fukuoka’s amazing tries against Scotland, Christian Lealiifano emotionally hugging his son at the end of Australia’s game against England and of course, Siya Kolisi’s speech immediately after the Springbok’s final victory.

Neither was the event short of drama and comedy both on and off the field.

Uruguay outplayed Fiji to get their first win in the RWC since 2003. England faced the All Blacks haka in a V-shape stance of defiance in their semifinal match and then proceeded to outmuscle their foes 19-7. Referee Jaco Peyper drew criticism and cringes as he was seen posing with Wales fans pretending to elbow them in the face after he had red-carded Sebastien Vahaamahina for the offence just a few hours earlier.

TJ Perenara scored a diving try in what was later awarded the try of the year against Namibia. Fans chuckled and at the same time admired the gutsy grin 5-foot-7-inches Faf de Klerk gave Welsh giant Jake Ball in their tussle in the semifinal match and of course everyone were endeared to Japanese super-fan “Bak-san” who turned up at many matches sporting nothing but a painted jersey on his topless torso.

At the end of it all, the best team came out on top and had the pleasure and the privilege to lift the Webb-Ellis Cup as World Champions.

This time it was a thoroughly deserving South African Springbok side and although the next World Cup still seems so far away (2023 in France), Rugby fans look forward to the next edition in awe of the Rugby’s reputation as a game that truly keeps getting better and better with time.