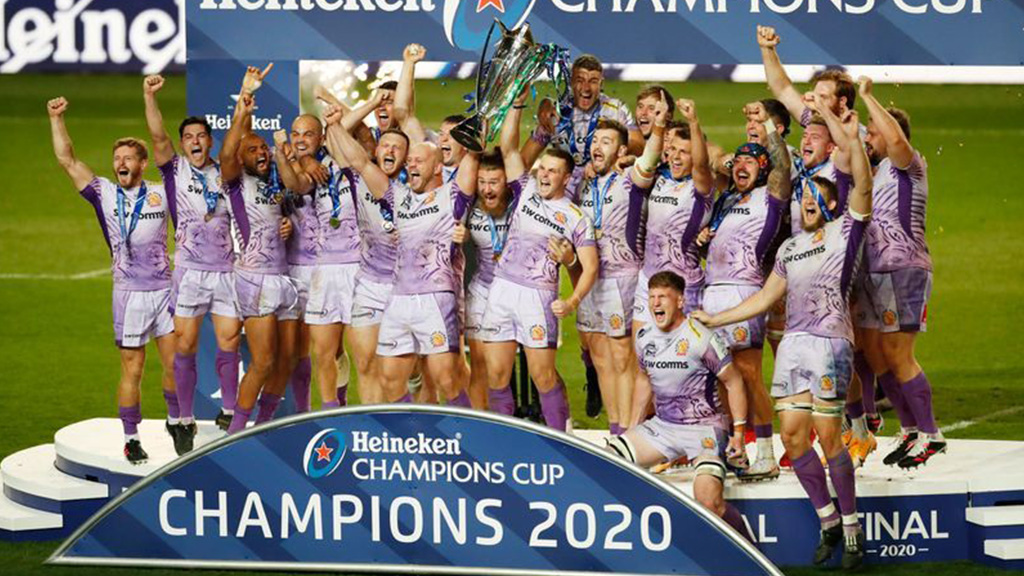 The weekend of 17-18 October gave us all a glimpse into how truly wonderful Rugby can be.

The second Bledisloe match for 2020 was played at Eden Park in front of some 36,000 (unmasked) spectators after the first match ended in a 16-all draw the weekend before. On the other side of the world, Exeter Chiefs were crowned European Champions after defeating Racing 92 in a close contested 31-27 win.

After last weekend’s 35-6 win over Bath Rugby, Exeter had already ensured a berth at the Gallagher Premiership Rugby Finals scheduled for the 24th of October, their opposition to be the Wasps who had knocked Bristol Bears out of contention on the same weekend. However, this was the European Championship, a title the Chiefs had never won before so the stage was all set for an exciting encounter.

The Chiefs started strong and had already crossed the line for their first try in the 7th minute through Luke Cowan-Dickie. Teammate Sam Simmonds followed suit in the 16th minute before Racing’s Simon Zebo cut the deficit in the 20th minute. Juan Imhoff slipped passed beyond the ruck an scored at the posts in the 30th minute and Finn Russell made no mistake with the conversion. Harry Williams scored for the Chiefs late in the first half and the conversion from Simmonds had the score at 21-12, going into the sheds.

An intense second half started with Racing’s Russell and Zebo combining for a brilliant try in the 43rd minute. Russell’s loose pass inside his own half two minutes later however, was collected by Jack Nowell and finished off by Henry Slade for a crucial try at the posts.

Camile Chat peeled off the back of a driving maul in the 50th minute to score once more for Racing and the conversion brought the score to 28-24 for Chiefs. A penalty kick for Racing in the 65th minute closed the gap to a mere one point with only 15 minutes left on the clock but having resisted the barrage of attacks, Chiefs were awarded a penalty which Joe Simmonds made no mistake with in the 80th minute.

At the end of play, Exeter Chiefs were the new European Champions.

Meanwhile in the Southern Hemisphere, the second leg of the Bledisloe Cup would be played at the seemingly imprenetable fort of Kiwi Rugby, Eden Park. The two teams had settled for a draw the previous weekend in Wellington but having had their last win at the venue in 1986, Australia under new Kiwi coach Dave Rennie would most definitely bring it on, on the day.

Within the first few minutes, Dane Coles had already immersed himself in a bit of a scuffle with Wallabies’ prop Taniela Tupou, bringing the majority of players from both teams together for a little pushing and shoving.

Although the Wallabies had much of the possession in the early stages of the game, the darling of the first half (and ultimately the game) was Caleb Clarke. Running through the defense like a tank on steroids, bumping defenders off like a bully, he was unlucky with his offload, denying Ardie Savea a try.

Richie Mounga drew first blood off a penalty kick before Aaron Smith wriggled in for the first All Black try in the 22nd minute which was then also converted by Mounga to have the men in black lead 10-0. Marika Koroibete crossed for the Wallabies in the 28th minute and James O’Connor’s conversion had the game a very close 10-7 at the half.

A strikingly disciplined early second half start by the hosts saw Jordie Barrett cross the line virtually untouched in the 42nd minute.

And then Caleb Clarke produced some magic.

Under pressure in their own half, Australia kicked the ball deep into New Zealand territory only to have Clarke catch it safely and turn the gas on. Running it straight – as only he can – Clarke destroyed the Wallabies defense, was brought down but got back up to take the ball up another 15 meters before a quick ruck and some clinical backline passing saw Ardie Savea cross the line.

At the 55th minute, All Black’s captain Sam Cane scored relatively easily down the right wing which was then again converted by Mounga. Despite the best laid plans of the men in green and gold, those would be the last points of the game.

Both teams now cross the pond to play game three at ANZ Stadium on the 31st of October and the last game on November 7th at Suncorp Stadium. They will be joined by Argentina who will compete alongside for the Rugby Championship while South Africa have withdrawn citing the lack of time to prepare due to the circumstances caused by the Coronavirus pandemic.