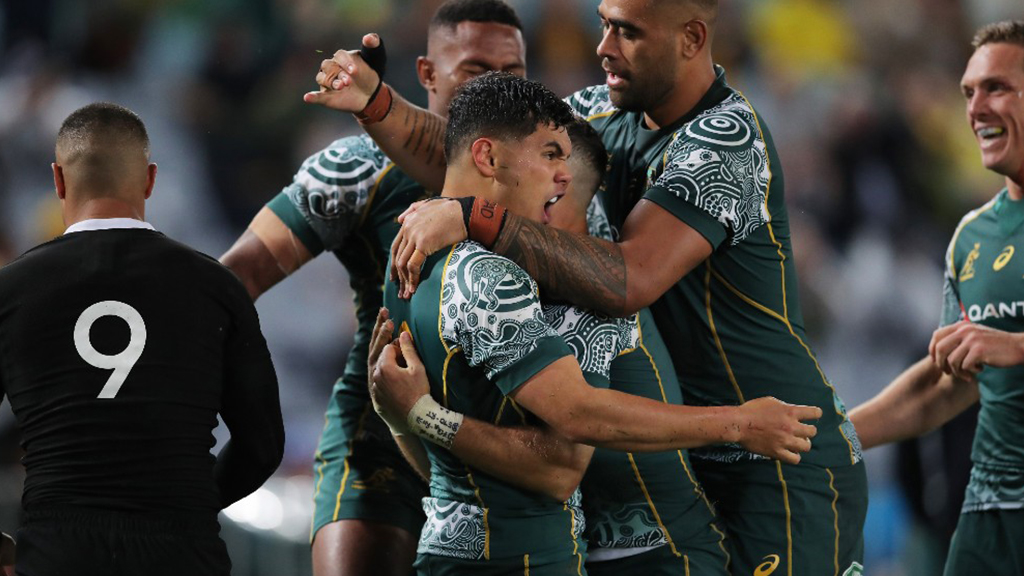 After crossing the pond for the remaining two games of the Bledisloe Cup in Sydney and Brisbane, many Rugby fans were hoping that the Wallabies would build on their draw in the first game and rise from their loss in the second game to put up a fight on home soil.

The buildup was promising and although the ABs were just as pumped up about winning the ‘Bled on Aussie turf, a young Wallabies side with their new coach Dave Rennie looked equal to the task and eager to take the game to the men in black.

Due to injury, James O’Connor had to sit out the third clash and Rennie placed uncapped Noah Lolesio at number 10 with another uncapped rising star in the form of Irae Simone playing for the injured Matt To’omua. On the Aussie bench were equally young but talented Tate McDermott and Fraser McReight, with Harry Wilson starting at no. 8. Five relatively new players, all in their early 20’s.

The All Blacks opted for fewer changes to their Bledisloe 2 squad, staying with Richie Mounga at number 10, Beauden Barrett at fullback and Caleb Clarke and Jordie Barrett on the wings. Scott Barrett was ready to come in from the bench as Hoskins Sotutu earned a start at no. 8.

With only 18,000-odd in the stands at ANZ Stadium, the anticipated battle finally kicked off to thunderous reception. Not long after, Filipo Daugunu was sin-binned for a reckless tackle on Caleb Clarke and to cut a long story short, the first half fizzled away for the Wallabies as the ABs clinically dismantled the men in gold.

Karl Tu’inukuafe sidestepped his way for his first ever Test try in the 6th minute and despite a disallowed Dane Coles try, Richie Mounga scored a double and Coles made sure of his second attempt to cross the line in the 30th minute to see the ABs lead convincingly 26-0 at the half.

A glorious start for Jordan Petaia crashing through several men in black opened up the scoring for the Wallabies early in the second half through debutant number 10, Noah Lolesio. A promising third quarter by the Wallabies did not follow through in the last quarter as Rieko Ioane and Jordie Barrett added on the points with Mounga converting. Final score 43-5 and the Bledisloe Cup stays in New Zealand for the 18th consecutive year.

In the northern hemisphere, Eddie Jones led his England squad to their third Six Nations title under his tenure, their first since 2017.

Having lost their first game against France way back in February, England won the remainder of their games, firstly defeating Scotland 13-6, Ireland 24-12 as well as a very close 33-30 victory against Wales in March. With Covid-19 in full effect, England returned to play Italy seven months later in Rome and their 34-5 victory was enough to secure the title (France defeated Ireland 35-27 in Paris but the margin was not enough to deny the Red Rose of England the championship).

England scored first through Ben Youngs within five minutes of the whistle, a fitting achievement for Young’s century game for England. A penalty from Farrell saw the visitors leading 10-0 before a Carlo Canna – Paolo Gabrisi combo saw the Italians cross the line to reduce the lead to five points at the break.

Youngs scored an early try in the second half and continued to break the Italian defenses eventually adding tries from George, Curry and Slade. Farrell was unable to convert the last two tries but it was enough to secure England the bonus point and seal the Six Nations title.