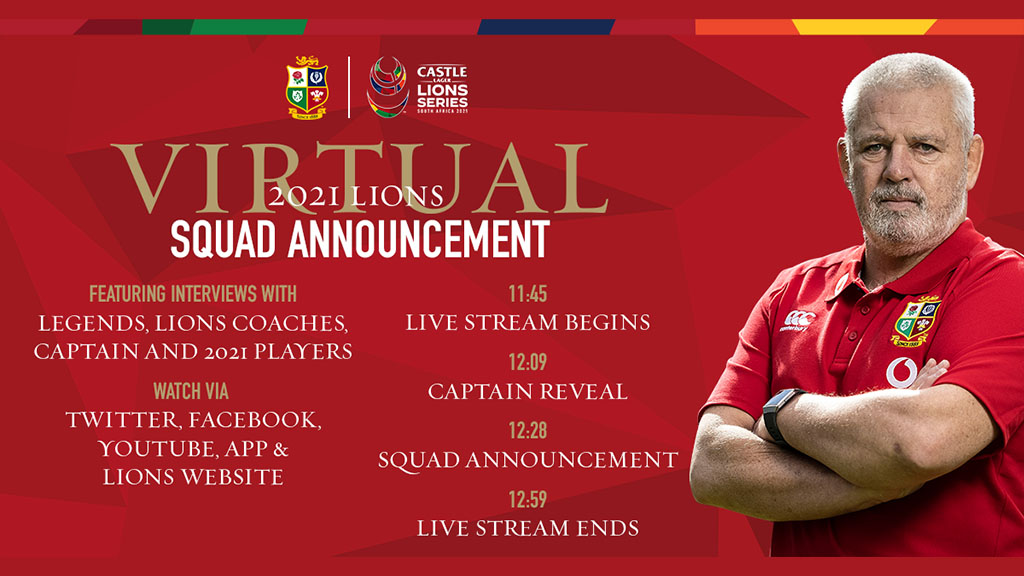 With as much hype as can be expected under the circumstances, Warren Gatland’s choice of British and Irish Lions’ players, were finally announced live on multiple platforms over the past weekend.

With the plethora of talent that was apparent throughout the Six Nations, Gatland had to make some difficult choices, including who would captain the squad. Alun Wyn Jones had always been a favourite but it did not stop the intense speculation that others, especially England’s Maro Itoje, could and would step up to take the leadership role.

Eventually, Gatland did name AWJ as captain, and along with him would be 36 others (including late addition Courtney Lawes) that will begin their South African tour in Johannesburg on July 3rd.

This year’s Lions included eight Scots (the most since 1989) including sizzling winger Duhan van der Merwe who was born and raised in South Africa as well as scrumhalf Ali Price who was picked over Harlequins’ Danny Care. 11 English players will be on tour including debutant Luke Cowan-Dickie but will not include prop Kyle Sinckler whose position will be taken by another Lions first-timer, Ireland’s Andrew Porter. Bundee Aki has also made the squad along bringing the total of first time Lions to 18.

The full Lions Squad is listed below.

Meanwhile at Orengetheory Stadium in New Zealand, it was Scott “Razor” Robertson once more who did his now signature breakdancing, after his Crusaders won their 5th title beating a revitalized Chiefs 24-13.

At halftime, the score was close at 15-10. Sevu Reece scored a brilliant try in the corner off an intercept from Ethan Blackadder but Damian McKenzie pushed the deficit back with a penalty goal. The immediate response was a kick-through from David Havili that bounced just right for Will Jordan to score the Crusader’s second try.

A 13-man lineout and some magic no-look offload Alex Nankiville to D’Mac brought the Chiefs to two points by the end of the first quarter.

Missing three penalties on the night, McKenzie could do no more to help his side’s valiant effort as the Crusaders added nine more points off the boot to win the title.

In Australia, the Super Rugby AU Conference played a rematch of last year’s final with the Reds once again facing the Brumbies.

Playing in Brisbane, the Brumbies dominated the first half (at one stage having 90% territory and 80% possession) but it was the Reds who scored first through a James O’Connor penalty in the third minute. The Brumbies hit back with a Tom Banks try ten minutes later and Tupou almost scored for the Reds soon after.

Another O’Connor penalty was answered by two from the Brumbies’ Lolesio that took the Brumbies to a seven-point lead at the break.

The Reds hit the ground running at the restart and although Jordan Petaia placed the ball in the corner, he was ruled tackled out just milliseconds earlier by the TMO. It would be O’Connor that slotted in his fourth penalty of the night as the Brumbies slowed down the pace in an attempt to run down the clock and return to full squad after Rob Valetini was yellow-carded for a high tackle.

The action returned as Lolesio slotted in another three points from a penalty giving the Brumbies a four-point lead.

In an exciting, nail-biting end to the game, the Reds lost possession from a lineout with a minute to play. Incredibly, they regained it and hit the Brumbies defense unrelentingly, winning penalties off some one-sided scrums. Six minutes after the hooter, with the crowd going crazy as the Reds opted for taps-and-goes, the Reds piled into the Brumbies wall of defense yet again and as they struggled to ground the ball, it eventually made its way to the back of the ruck and passed left to a waiting James O’Connor who scored the winning try.

The Trans-Tasman competition of Super Rugby will begin the weekend of 15-16th May 2021.