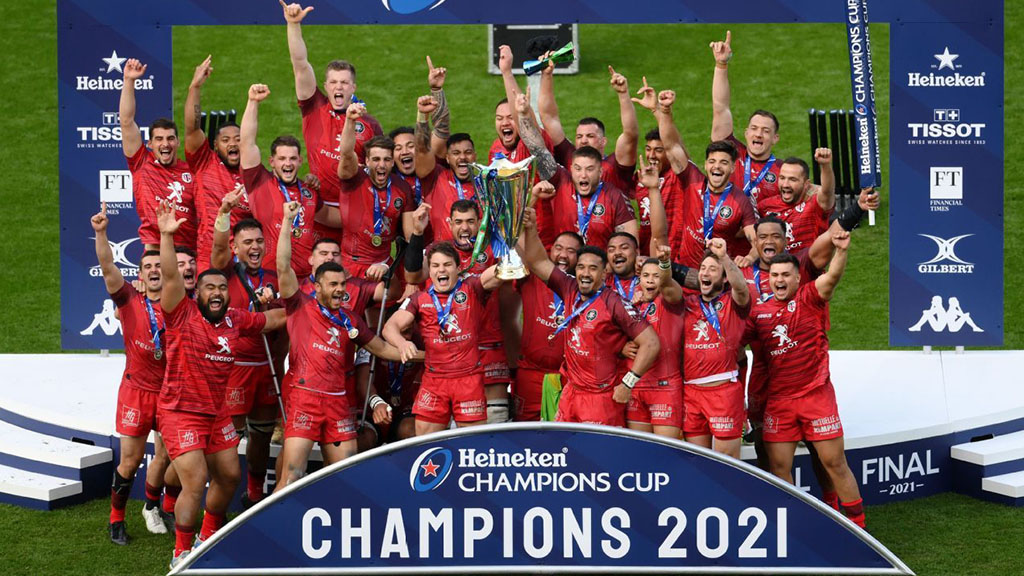 Playing against 14 men after the 30th minute, Toulouse edged out compatriot club La Rochelle 22-17 to clinch a record fifth European title, in front of a crowd of 10,000 spectators at Twickenham over the weekend.

The end of the first half saw La Rochelle leading 12-9 with all points coming off the boot for both clubs. Trading penalties did nothing to liven up the crowd until La Rochelle center Levani Botia was red-carded and then the urgency of the situation seemed to affect both sides, especially since Toulouse also went a man down after the yellow being shown to Rynhadt Elstadt.

Cheslin Kolbe was denied a try early in the second half and the score was levelled at 12-all after Toulouse scored another penalty from Romain Ntamack’s boot.

After an hour of play, Juan Cruz Mallia finally scored a try for Toulouse, giving his side the lead. La Rochelle’s Kiwi import Tawera Kerr-Barlow dived over to ensure an exciting ending but it was not to be for La Rochelle, who were first time finalists this year.

Two missed kicks from Ihaia West may have given La Rochelle a stunning win but in the end, Toulouse managed to hold on and secure their record win.

On the other side of the world, Super Rugby transitioned into its Trans-Tasman format with Aussie and Kiwi teams finally meeting each other after their respective national competitions were decided.

After two weeks of competition however, the big question that arose was “Is the competition already over?”

Week 1 of the competition saw NZ clubs win all of their matches and it could have been attributed to the jitters and what not, but after the end of the second week, Aussie teams had yet to win a game against their neighbours form across the pond and the Kiwi’s dominance began to worry not only the Australians but also their South African counterparts who had seen even less competition during Covid-19.

After watching two weeks of the competition, most will agree that the Australian clubs have given it a fair go. New talent such as ‘Tahs winger James Turner and Reds’ halfback Tate McDermott are superb examples of young Australian Rugby players coming up through the ranks. The spirit is there, the ‘good thing’ not so much…

Add to this the ongoing social media discussion from South Africa as whether pulling out of the Super Rugby was a good move or not, and how not having South African teams play in it may be detrimental to both Springbok and Australian Rugby and you still can’t seem to get past the fact that at least for the time being, the Kiwis are just too good. Granted that most of the big names from the Springboks have been playing in the various, more financially lucrative European competitions, some serious doubt has been thrown into the works as to whether the move has been a wise one.

With several weeks to go in the competition, a breakthrough win by an Australian team will definitely boost its overall appeal but alas, no clear signs of such can be seen at the moment. A lot has to do with how players and coaches are able to adapt and adjust on the day as well as how to not be sucked into playing the opponent’s strengths. Unfortunately, we haven’t seen that comeback from any of the Aussie teams after the first two rounds.

But the game after all is Rugby and anything is possible when players battle over possession of a giant egg for 80 minutes. Stay tuned for further developments, it’s not over yet.