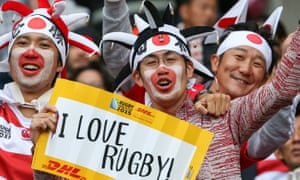 With a little over 200 days to go before Japan becomes the first Asian country to host the Rugby World Cup, the global family that makes Rugby so great is abuzz and yet still somewhat diverted by all the other fantastic Rugby going on.

The ninth edition of Rugby’s supreme competition will be held in 12 stadiums across the land of the rising Sun, from Egao Kenko Stadium in Kumamoto in the south all the way to the Sapporo Dome in the north. Stadium capacity runs from just over 16,000 at Kamaishi Recovery Memorial Stadium to almost 72,500 at the International Stadium in Yokohama. Plans to have matches in Hong Kong and Singapore have been scrapped and now all games will be played in Japan only.

But venues and possible scenarios are taking a back seat to the trepidation fans have regarding all of the undercurrents currently unfolding in competitions around the world.

The Super Rugby is on in the Southern hemisphere and after the first exciting week already done and dusted, punters and fans alike wait anxiously for it all to unfold. With South African teams Bulls and Sharks winning by comfortable margins against Stormers and Sunwolves respectively, a strong performance by Quade Cooper in the Rebels’ win over the Brumbies and wins by smaller margins by the Highlanders, Crusaders and Hurricanes against their opponents, the rest of the competition is set to keep everyone on the edge of their seats.

Ma’a Nonu made his comeback to Super Rugby in the Blues loss to the Crusaders and David Pocock sustained his second concussion in three months just five minutes into the Brumbies game against the Rebels. Different circumstances for two of the best to ever play the Game, but both will undoubtedly be eager to return to their respective national teams for the big show in Japan later this year.

The northern hemisphere’s French Top 14, going just past the halfway of their season has been a scintillating source of some surprising news with RC Toulonnais owner and president Mourad Boudjellal calling for the club’s 2018 signing Julian Savea to “take a DNA test” after what he saw as poor form in their loss to Agen. In the Premiership, Chris Robshaw of the Harlequins finally overcame his recent knee injury to return to the team in its win over Worcester and give some hope to his return to the England squad for the World Cup.

The Six Nations is well underway and England is still the team everyone wants to beat but with wins against Ireland and France only proves that they will be strong contenders come September.

Across the Atlantic, the Americas Rugby Championship is entering its third week and Argentina XV have won both of their matches to lead Uruguay in the current standings. A noteworthy achievement must be mentioned as Brazil defeated Canada 18-10 in their first win of the 2019 competition.

All of the above dynamics is adding suspense to the anticipation of what RWC 2019 in Japan has in store. The prospect of quality players missing out due to injury on one end of the spectrum to difficulties in player selection due to the massive number of talent available, will impact the contest in some way or other. And all we can do is to wait for what promises to be a cracker of a competition later this year!