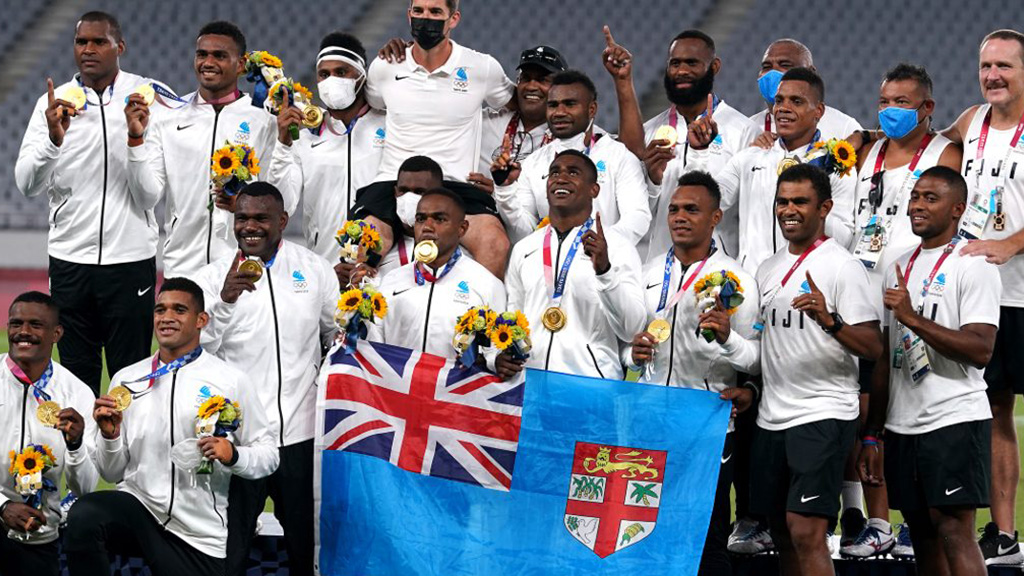 After having a one-year delay, and also sacrificing the aesthetic beauty of arguably the most beautiful Olympic logo ever (2020), the Tokyo Summer Olympics were finally under way and Rugby 7s once again shone bright as one of the most exciting events at the Games.

Covid restrictions meant the teams played at an empty stadium but the millions watching around the world could feel the energy of the teams in both the Men’s and Women’s competition as most matches were broadcasted on television as well as online.

The Men’s competition started off proceedings and it was clear to see that the Rio Olympics Gold medal winners, Fiji, were strong favourites from the beginning. Although famous – or perhaps more accurately infamous – for their flair and agile attack and offload game, the Fijians brought a new perspective to their play, with superb defensive skills supporting their already brilliant attack.

A wonderful surprise came in the form of Argentina’s Montero whose speed and game vision shocked most observers and helped his team eventually reach the Semi-finals of the tournament. A not so wonderful surprise however were strong contenders South Africa and Australia who failed to make it into the semis.

Great Britain overcame a lot of financial and covid-realted challenges to fight their way into the Bronze medal match, unfortunately losing to an invigorated Argentina team 17-12.

A few early mistakes from New Zealand saw them have to play catch-up to the Flying Fijians in the Gold medal match but the 2016 winners held on and were crowned back-to-back Gold medal winners in the end.

In the Women’s competition, Rio Gold medal winners Australia as well as New Zealand were the hot favourites. From the northern hemisphere, Great Britain and France were strong contenders.

How surprising it was to see then that the Fiji women’s team fight their way into the semifinals with a 14-12 win over defending champions, Australia. Although they were pipped by the Silver Ferns in the semis, the Fijian ladies managed to secure the Bronze after defeating Team GB 21-12.

The Gold medal match between New Zealand and France was a prime example of the excitement of Rugby 7s. France stepped up their line-up with powerhouses Seraphine Okemba and Anne-Cecile Ciofani as well as veteran Fanny Horta. New Zealand were led by captain Sarah Hirini and experienced players such as Tyla Nathan-Wong, Ruby Tui, Portia Woodman and Tracy Flueler.

A comeback from France was not enough to break through the New Zealanders lead and discipline and it was the Kiwis who took home Gold winning the Final 26-12.

After Covid-19 related issues almost threatened to cancel the British & Irish Lions Tour completely, after opponents were changed at the last minute, and after all Test matches eventually moved to Cape Town altogether, South Africa were crowned Champions. Getting there was no easy feat, though and if anything, took a slight turn into the bizarre.

Losing the first Test 17-22, South Africa Director of Rugby and former Rugby World Cup winning coach Rassie Erasmus posted an hour long video online. In it, he all but criticised all sorts of different aspects of the First Test including ever so delicately questioning opposition sportsmanship as well as refereeing. Some saw it as a deliberate tactic by the Springbok management but others, especially the Lions did not, and shot back with criticism of their own.

Whatever the intentions were, suffice to say that South Africa won the Second Test quite comfortably 27-9 and eventually took the Series with a 19-16 win a week later.

The final Test saw the return of veteran Morne Steyn who slotted the winner in the 79th minute as well as a stunner of a run from Cheslin Kolbe who scored for the home side. A revelation for the Lions had to be Finn Russell who comfortably and remarkably absorbed the pressure of replacing Dan Biggar and took his team to a higher level of play.

Half-way around the world, it was Bledisloe One, 2021 at Eden Park.

Playing as part of the Rugby Championship, the All Blacks hosted Australia in what would also be scrumhalf Aaron Smith’s century test.

With the score at a respectable 16-8 for the hosts at half time, the Kiwis scored the “try that never was” in spectacular fashion as Sevu Reece finished brilliantly as the Abs took the ball from end to end. A forward pass was adjudicated via TMO however and it would be six minutes later that the Abs actually scored a try through an intercept from Richie Mounga.

The Kiwis looked like they had it in the bag after two more tries from David Havili and Damian McKenzie but with 15 minutes to go, the Wallabies dug deep and refused to give up, chalking in three tries to make the final score 33-25.

With Bledisloe Two less than a week away, Australia has shown they can step up and deliver when they want to.